Laravel vs Django: Which Framework is Better? 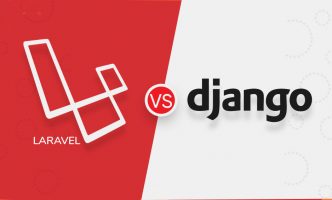 Well-informed decisions are the foundation of excellence!

We all know that, but do we follow that?

As you know that your website is the only way to grow your business online,

Have you conducted intensive research before selecting the web development framework to build your website?

Don’t worry not many people can raise their hands on this.

Folks, when you don’t buy groceries before comparing the quality and price of different vendors,

Why are you not analyzing various leading web development frameworks before designing your website?

So, let us today draw a comparison between the two leading web development frameworks – Laravel vs Django.

With the comprehensive comparison, you’ll be able to pick the right framework to boost the reach of your website.

Laravel was first prompted in 2011 by Taylor Otwell with the most upscale traffic-related features.

Laravel development is proficient and quick as compared to other CMSs because of Model View Control architecture.

Laravel got the attention of developers way quickly due to the superior quality functions and various inbuilt features.

At Protocloud, we always tell our clients – if you want to develop your web applications easily and safely, you should invest in our Laravel development services without any doubt. 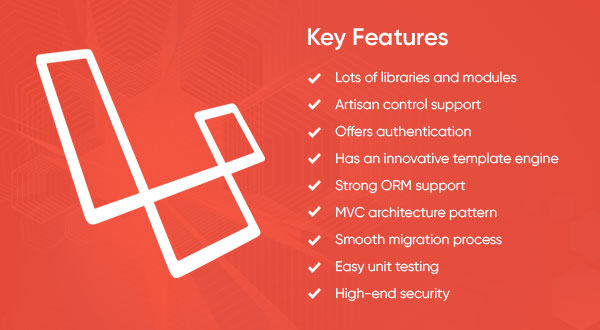 Django is an open-source framework written in the Python programming language.

It is developed to create complicated and features loaded website applications. Unlike Laravel, it supports Model View Template architecture.

It is popular among the developers’ community due to its lightweight features and sturdy testing and development modules.

Django is an older framework launched in back 2005 by Django Software Foundation, and this framework is adhering to numerous popular portals such as Pinterest, Instagram, and others.

Due to the simple development process, Django is becoming a favorite choice of startups. 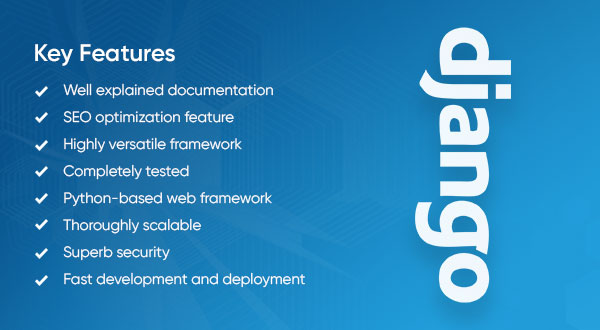 Laravel vs Django: Which Web Development Platform Should I Use?

If you are confused between the Laravel vs. Django debate and can’t decide which framework will be ideal for your new project, we can help by scaling both frameworks on the same grounds.

Due to the strong architectural patterns, Laravel is ranked the 5th most popular web development framework on GitHub.

On the contrary, Django follows the MVT architecture pattern, which makes it the second most popular programming language.

If you are a new developer, coding is going to be intuitive and easier on the Laravel framework for you.

You can easily rectify your coding errors with security alerts, which are useful for new coders.

However, the Django coding structure isn’t for beginners; you have to be a highly experienced programmer to create complex codes in Django.

You won’t get an inbuilt routing process in Django to create an API. 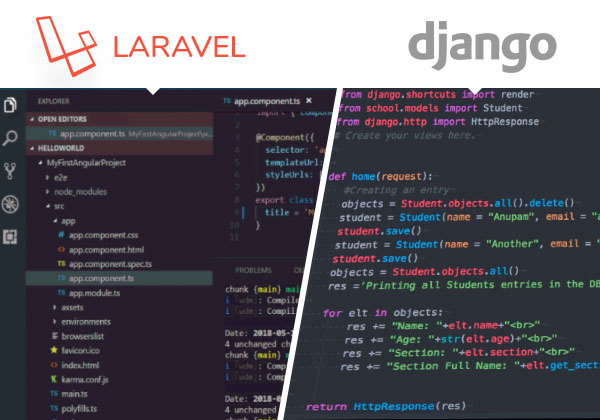 One of the best things about Laravel is that it has inbuilt support for API because JSON queries are returned by default.

So, you don’t have to go through the hassle of creating APIs in Laravel.

But, things aren’t that simple with Django; you have to find your way through the library to build an API because Django doesn’t come with inbuilt API features.

Thus, if you aren’t familiar with the backend framework, you should use Laravel.

Laravel is the best framework for new developers who are learning their way through different languages.

The intuitive and steep learning curve of Laravel can be learned easily.

You can easily learn the complicated processes with Laravel like data mitigation, REST, ORM composer, or others.

There are various documents, and community support is available to master Laravel’s development.

If you think for a moment, the learning curve with python is zero. Thus, you can easily work and deploy codes with Django.

Furthermore, the code readability with Django is quite simple, so developers can comfortably read and write complex codes.

Laravel is packed with superior security settings and confirmations that let you secure your applications with strong password protection. 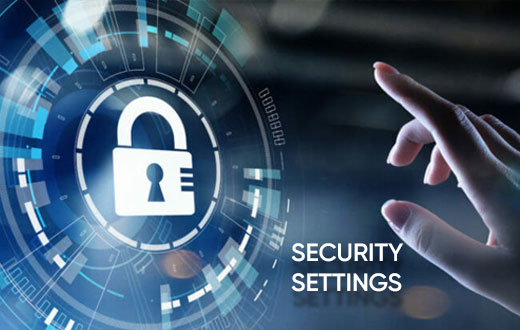 Django follows some of the best security approaches too.

It refrains developers from making common errors that can reduce the security shielding of your web development process.

Overall, both the platforms provide the highest level of security features, so on the security grounds – Laravel vs. Django don’t differentiate.

Laravel has extended library support. With the well-structured and analytical Laravel libraries, you can build complex websites smoothly.

Plus, the Laravel comes with a gigantic video tutorial library. Approximately more than 1100 Laravel video tutorials are available.

On the other side, Django is jammed with a robust library.

With Django, you will get an abundant self-contained package that further contains numerous reusable features.

So, on the point of the library – both programs are again standing on the high pedestrian.

Laravel vs. Django debate has been mastered by numerous popular online brands also.

In short, we have amazing live examples of both programs to make a well-informed decision. 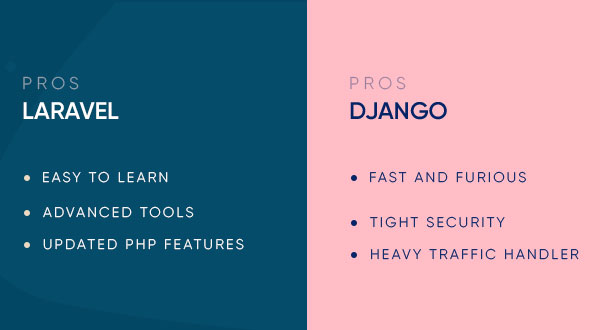 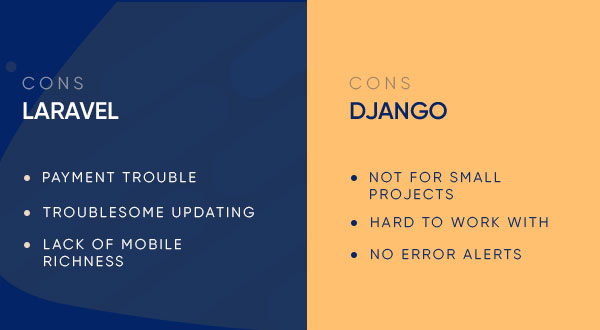 Between the Laravel and Django – we can’t announce a winner, period.

Both the platforms are highly functional and robust, so we can’t conclude a winner.

But, you can pick a winner based on your requirements.

Otherwise, for the small project, complex projects go for Laravel, so the final choice is yours.

If you can’t decide between Laravel and Django, you can get a consultation from Protocloud Technologies (web development company) to pick the perfect web programming language as per your project.

2 Replies to “Laravel vs Django: Which Framework is Better?”

The best app developer team that I have worked with. Awesome team. Strongly recommended. Thanks for all the work and doing a great job.

They were very easy to work with and completed the job quickly as required. I will use them again for my design and development work.

Ready to speak with a technology expert? Give us a ring

Please fill in the form and our representative will get back to you. 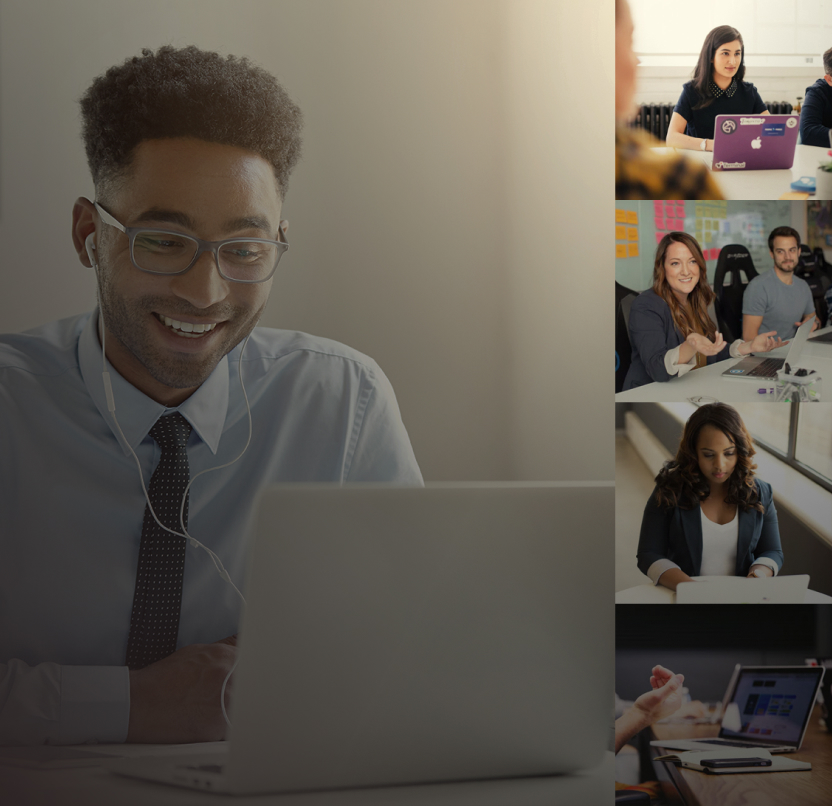 We have developed more than 3000 mobile apps and websites.

This website uses cookies to improve your experience while you navigate through the website. Out of these cookies, the cookies that are categorized as necessary are stored on your browser as they are essential for the working of basic functionalities of the website. We also use third-party cookies that help us analyze and understand how you use this website. These cookies will be stored in your browser only with your consent. You also have the option to opt-out of these cookies. But opting out of some of these cookies may have an effect on your browsing experience.
Necessary Always Enabled
Necessary cookies are absolutely essential for the website to function properly. This category only includes cookies that ensures basic functionalities and security features of the website. These cookies do not store any personal information.
Non-necessary
Any cookies that may not be particularly necessary for the website to function and is used specifically to collect user personal data via analytics, ads, other embedded contents are termed as non-necessary cookies. It is mandatory to procure user consent prior to running these cookies on your website.
SAVE & ACCEPT